A Hardhat Tour through Renovations of Mecklenburg Mill

A Hardhat Tour through Renovations of Mecklenburg Mill
Each time I walk by the Mills during the day, I hear the buzz of power tools and see the construction workers headed to and fro in their brightly colored safety vests and hard hats.  Curiosity gets the better of me and I can’t help but wonder what the inside is looking like at this point in the renovation.
In August, I finally had the opportunity to see for myself. I originally met at Smelly Cat with Jen Duncan, Director of Marketing for The Community Builders (TCB), when they were taking rental applications in person at Neighborhood Theatre. A few weeks later, I sat down with Andrew Connell, Construction Manager, and Ron Wong, Senior Project Director, to get an update of how things are coming along. They offered to take me on a physical tour.
There are 48 units in the Mecklenburg Mill (Phase 1) with currently 150 applications to process. As NoDa requested, TCB made an outreach to target artist applicants specifically. So far, applications have come from teachers, artists, nannies, and airline employees, to name a few.
All the apartments are around the perimeter of the mill, so they all have those great 11’ high x 8’ wide windows. The apartments themselves will have an industrial/modern feel with
exposed brick walls. Completion of Phase 1 is targeted for mid-late October with move-in starting in late October.
Phase 2 will be the Johnston Mills’ renovation. 70-80 units with commercial/office/retail space is planned, though nothing is definite at this time while TCB continues to research how best to utilize the space.
TCB told me that they want to tap into the NoDa vibe by providing unique amenities for their residents. In Mecklenburg Mill, there’s a club room with kitchen and lounge, an art gallery (property management intends to put together artist shows), a fitness room, and a two-story activity room. Many of these areas feature skylights. The South Wing (facing North
Davidson) includes a sunroom/library/reading room with a large desk made of reclaimed wood. There will also be tenant bike storage, a laundry room, and an elevator. Outdoor features include a tot lot/playground, gazebo/pavilion area, pet stations, bike racks, and grills.
And the parking, you ask? It will be permitted for the residents’ use with guest passes/tags. Additional parking is planned along North Davidson Street.
As part of their M.O., TCB seeks to preserve the historic character of the buildings they develop. The ceiling in the art gallery room showcases the Mills’ original metal camber rods restored to a new 11x13x43’ beam (see photo opposite). The old boiler was saved and is on display in the club room. The old smokestack remains, and the MECKLENBURG MILL painted sign on the side of the building also stays.
Unfortunately, the old mill home that used to be the paymaster’s house when the Mills were still operable, was demolished. The house had been vacant for years and was unsalvageable. Deidre Hill, a former resident of the mill house whose father was the paymaster, spoke with TCB about the history of the Mills and the house. She supplied them with vintage pictures of the Mills dating from the late 1950’s to early 1960’s. TCB is considering displaying the photos through the Mill. Two mantels were saved from the old house and will be repurposed in the new community room and art gallery.
The Mill itself needed a lot of salvaging. TCB had to replace most of the roof which had been damaged during the years of condemnation. Several sections of the building needed to be rebuilt due to the deteriorating brick work and rotted wood. The North Tower is brand new construction; the old one was taken down, then the original bricks cleaned and reused.
In the West Wing, the roof decking and beams are original. When on the main floor, look up and you’ll see the original mill floor used in the common areas on the second story. Basically, it’s the ceiling now for the first floor. They took all the decking out, did the beam work, and then put it all back. They have preserved the old metal fire doors as well.
On-site discoveries during the construction process include some old gears, and they have put together a vintage glass bottle collection of finds from various spots: milk bottles, Dr. Pepper soda bottles, etc., some that date back to the 1930’s. These may be put in an enclosed display case in the building.
In the spirit of repurposing, TCB gifted beams and decking to Free Range Brewing who approached them and asked about salvageable materials. 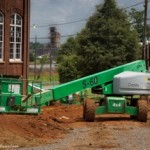 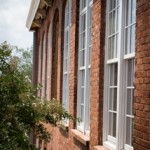 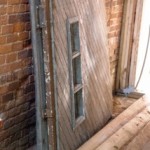 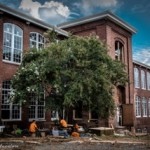 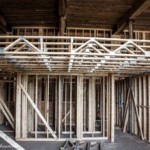 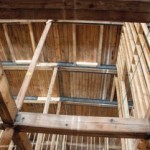 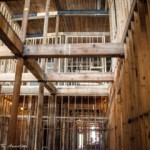 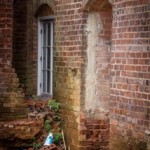 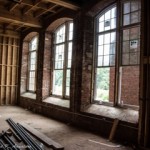 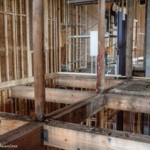 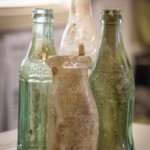 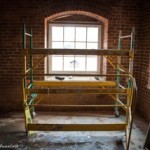 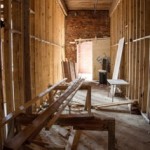 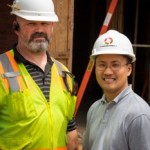