To watch the growth of this Little Engine That Could success story has just been awe-inspiring. At the time NoDa Brewing opened back in October of 2011, they were only one of three microbreweries here in the area, including Olde Meck Brewery (OMB) and Four Friends (now closed). Currently, there are 15 existing microbreweries with another 18 or so planned within the Charlotte Metro area. I toured the new facility with owner Suzie Ford. She is excited about the growth regarding microbreweries in the area as a whole. She feels they “need to be a true craft interpretation. You only have 1 chance to make a first impression”, and that consumers have so many choices now that “the product has to be great”. There’s a limited number of tap handles so all breweries should be putting out something different, something worthwhile.

NoDa Brewing started right here on N. Davidson St and made a name for them right out of the gate. They have outgrown their current location so with a need to expand, they found a great location nearby in a historic building on N. Tryon Street.   Steve Harris of Harris Development is the landlord and it’s a Built to Suit situation. Steve was on the cutting edge with SouthEnd’s development, and now is the first to develop along the North End corridor. Many are buying, but haven’t started developing yet in the immediate area. Just four short blocks from the 36th St. future Light Rail Stop, it’s walking distance to the heart of NoDa.

To give you an idea what kind of growth we are talking about, the old building is 11,000 square feet; the new one is 32,000 square feet. The huge new Tap Room has seating capacity up to 244 people. When you walk into the new entrance, staying true to its NoDa roots, there will be multiple nods to local art. A mural upon entering the building will greet you. There are 2 murals planned for the exterior side of the building that faces the Amtrak line, so anyone riding the train going by, crossing over N. Tryon St. will see the brewery. There will be another inside to designate where the tours start. A lot of thought has gone into the planning of the new space, right down to the restroom signs. Suzie drew inspiration from their CAVU can design. The men’s room will have the pilot from the can. The women’s bathroom will have the flight attendant, and the background will be the sky. What’s the coolest part (in my humble opinion)? The CO2 tank out front next to the grain silo will be wrapped to look like a gigantic Hop, Drop ‘n Roll can. This is going to make a statement along the N. Tryon corridor; you won’t be able to miss the brewery. They have already painted all the exterior trim in the NoDa Brewing logo colors with the logo itself coming soon (possibly done by the time of this printing). If you aren’t sure where they are located, you won’t have to wonder for much longer. (It’s at 2921 N. Tryon (corner of N. Tryon and 32nd). If you take Matheson and turn right on Tryon, it is the 2nd big building on your left. Can’t miss it.) 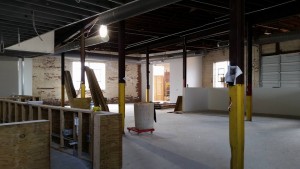 Part of the Tap Room

There’s a separate room for cooler and can storage that is 4500 square feet. The back part of the building is 13,000 square feet, which houses the Tap Room. The interior paint colors will draw from the logo: oranges, greens, deep browns. Staying with an industrial feel, the exposed brick will have the paint scraped off, and left in its funky and natural condition. All kinds of cool lighting are planned. The Tap Room will have 2 bars. One bar will be mainly for outside and overflow and will have 8 taps consisting of their regular lineup. The main bar however, will have three towers; an 8 tap on each end, with a 16 tap in the middle. There will be 2 TV’s behind the main bar. The Tap Room will have church pews along the one perimeter wall. The bar tops and tables will be crafted of repurposed wood from the other side of the building. Drink rails will surround the existing beams so there will be plenty of places to put down your drink. There’s a lounge area here too, with a couch, table and chairs. A side room off the main Tap Room will be a meeting space, and/or to be reserved for private parties.

The Canning Room will be on the tour. They have invested in a Leibinger System, which will process 150 cans per minute, up from 30 which is what they do now (and was contracted out). They were the first in the area to do 16 ounce cans. Suzie reasons, “Everyone drinks a pint, so it only made sense to do a 16 oz can”. They prefer cans to bottles: better for the beer to remain out of light, less O2 in the can vs a bottle, better for the environment, recyclable, can take by the pool or on the beach, lighter weight for carrying, etc. As we talk about the different aspects of running a brewery, it becomes more and more evident just how much thought and planning the owners have put in, every step of the way.

The Production Area will make any local beer fan’s jaw drop. Towering above you when you walk in the room, are four 240 Barrel Fermenters that are 22’ tall. One barrel holds 31 gallons, so these contain almost 8000 gallons (7,440 to be exact). Plus there are two 240 barrel Brite tanks. Newlands Systems out of B.C. is the equipment manufacturer. 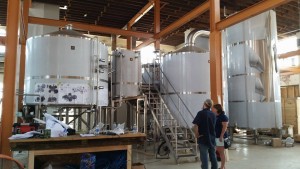 Walking down the Long Hall, patrons will see a showcase of NoDa Brewing’s history as well as the history of the building itself. In 1939, Speas Vinegar was there and they also produced liquor – gin and whiskey. Then it was Heinz Vinegar, then Fleishmann – which was the first commercial yeast in the country. In the late 1980’s/early 1990’s, Ray’s Roofing took over the space. Now, the building gets a new use and in a roundabout way, is going back to its roots. 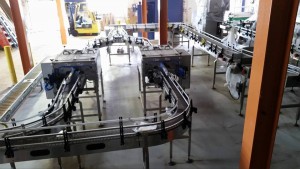 This is a huge step up for the Noda Brewing Family. At their current location, much of the process is done manually. For the grain being dumped into the mash tun, they dump a bunch of 50 lb bags into the grain mill which then cracks it and augers into the mash tun. Going forward, there’s two new grain silos, holding 38K and 42K pounds of grain respectively (the base grains that are used the most), and are directly connected to the brew house. It will automatically put in the grain mill itself versus dumping in bags. They will be going from small batch (15 barrels per brew) to 60. I asked, when going from a small batch to a larger, is it like making a cake from scratch? I mean, with a cake you can’t just “double the recipe”. Sure enough, same case here. They will be making practice batches til perfected. Suzie says expect a bunch of new creations in the upcoming months – each time they try one out they will write down what formula used, so it can be duplicated if something turns out to be a happy accident along the way (the brews that don’t meet NoDa’s standards will be disposed of). 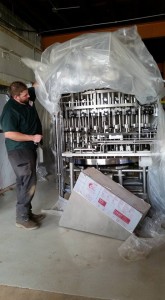 There’s 104 parking spaces, plus lots of parking along 32nd St and overflow on the green strip (another 175 spots). There’s a tower in the middle of the parking area that is going to be repurposed; expect a HUGE movie screen facing the patio area where you will be able to sit and watch movies with a “drive in-esque” feel (this will occur in Phase 2). Speaking of the patio area, it will include benches, a huge fire pit, bocce ball, corn hole and other assorted outdoor games. The 1940’s brick from the interior is being salvaged and will be repurposed onto the new brick patio. There will be a pad dedicated to food trucks with a dedicated outlet so no generator noise to disrupt conversation or movies being played.

I asked if it felt like they were “leaving NoDa”. Suzie was completely surprised by this question, as they are keeping the existing Tap Room and will be turning the brewing side into specialty brews; barrel aging and sours will only be available here. They will still have the Wednesday Running Club. There is no event space at the new location so the existing N. Davidson Tap Room will be utilized for that as well (99 person occupancy). Their hours will be modified; they won’t be open on Mondays. Public tours will be held at the new location; only private tours will be done at the N. Davidson spot. With the Light Rail, patrons can walk to either location. The current Tap Room is more homey and cozy; whereas the new location is bigger, not as intimate. Suzie doesn’t see it as a one or the other type of thing. She says, “There are now two locations to choose from, nothing’s changing. We just needed more room.”

Speaking of the new location they are aiming for a soft opening possibly at the end of September. Their Pink Pint Night will be Oct 1st, in conjunction with Charlotte Radiology, benefitting Levine Cancer Center for Breast Cancer Awareness Month.

This year they produced 15K Barrels. I asked what their goals are moving forward. Thing is, according to NC ABC Code, once a brewery reaches 25K barrels limit, it gets turned over to a distributor. This is known as a self-distribution cap. Once they hit 25K they can no longer self distribute and have to turn over our distribution rights to a distributor So, you basically give everything you built including your customer base to the distributor. If this law wasn’t in effect, they could do 35K barrels next year easily, just in the Charlotte Metro area. Instead, they will plan to make 24,999, divide that by 12 months and that’s how much they will be brewing monthly. NoDa, OMB, Wicked Weed, and Red Oak are the local breweries who current stand to be affected by this due to production. Needless to say, NoDa B. doesn’t agree with this law and are actively looking to change it. Their 2016 goal is to educate people, speak with the elected officials and tell their story. In 2017, if the law is changed, the sky is the limit. They would like to see their cans in every grocery store in Charlotte. “The sky is the limit”, Suzie says, and I for one will be watching their progress and rooting for them to have continued success, as I drink my Coco Loco.

You can follow NoDa Brewing’s progress and upcoming events at www.Nodabrewing.com