The Arts District, commonly known as “NoDa” (an abbreviation for North Davidson), is located North of Uptown.  This is An old mill neighborhood now revitalized.  It’s known for it’s colorful murals, artsy vibe, and local music scene.  Neighbors aren’t afraid to express their individuality and it shows, with artsy displays in yards and on homes.  NoDa has some of the more eclectic shops, coffeehouses, and craft breweries in the area. Boundaries are Matheson Bridge/Matheson, The Plaza, Sugar Creek and N. Davidson.  The neighborhood also includes an offshoot over to N. Tryon off 36th St.

– The craziness that is NoDaWeen and the NoDa Krampus Krawl.

– Getting a coffee (it’s safe to say we love coffee here with three shops within a two block radius!  Smelly Cat, Ozpresso, and The Daily Press all call NoDa home)

– Sitting outside people watching at Dolce Vita while drinking some wine

– The December All Arts Market is a great place to get locally made art.

– The enthusiasm of neighbors cheering on participants whether that be at the annual Thunder Road marathon or the NoDa Grand Prix Bike race.

– Impromptu drum circles and our music scene.  Attending concerts at Neighborhood Theater, The Evening Muse, and Chop Shop, just to name a few of our more popular venues.

– The camaraderie experienced at the Johnson YMCA with the other people also trying to get in shape. 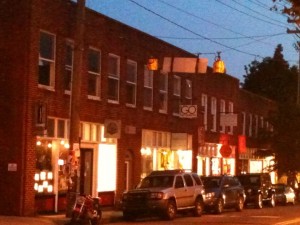 Neighbors weigh in regarding what they love about NoDa as well:

“Eclectic architecture and people from all walks of life is a beautiful mix. There also seems to be a large amount of people with an entrepreneur mindset and local, small businesses seem to flourish in NoDa. I sense a spirit of encouragement and acceptance by most people.” – A. Jimenez

“I love that it is like one big family. I haven’t experienced that in other neighborhoods I have lived in.” – C.Collins

“4th of July at the park with DIY fireworks was very cool.” – A.Doran

These are just a few of the things that make NoDa, well, NoDa.