Get your culture with the Charlotte Symphony at a cool spot

The Charlotte Symphony and beer, you ask?  At a super cool local craft brewery?  Why, yes! We checked at On Tap at NoDa Brewing Co. this week.  I love the Charlotte Symphony and take any opportunity I can get to see them, especially if they are at an outdoor or unusual venue.  Small venue and good acoustics, not to mention up close to the musicians? Count me in!  So for a mere 10 spot each, we got a ticket along with a beer and a NoDa Brewing Co. koozie.  Not knowing what to expect regarding the interest and size of the crowd, we should’ve planned to be there earlier.  The parking lot was chock full when we arrived. “Bach and Bock” was the theme for this event with a feature beer – an exclusive hellesbock named “Neighborhood Bach Party”. 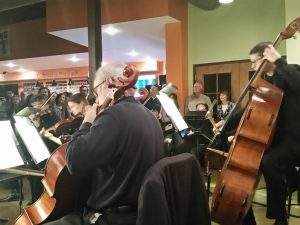 I think they played for about an hour total, with an intermission halfway through the set. It was at this time that we lucked out and scored seats right by the musicians. It was like being on the stage with them, we were so close we could read the sheet music. What a wonderful experience.

When are future events?

If you are interested in attending a future symphony event at the brewery, there are two more dates coming up: January 31 & April 25, 2017.  I would strongly suggest buying your tickets in advance and getting there early.  There was also a food truck on site if you are hungry.  They did have the outdoor patio open but may be a bit chillier come January’s performance!